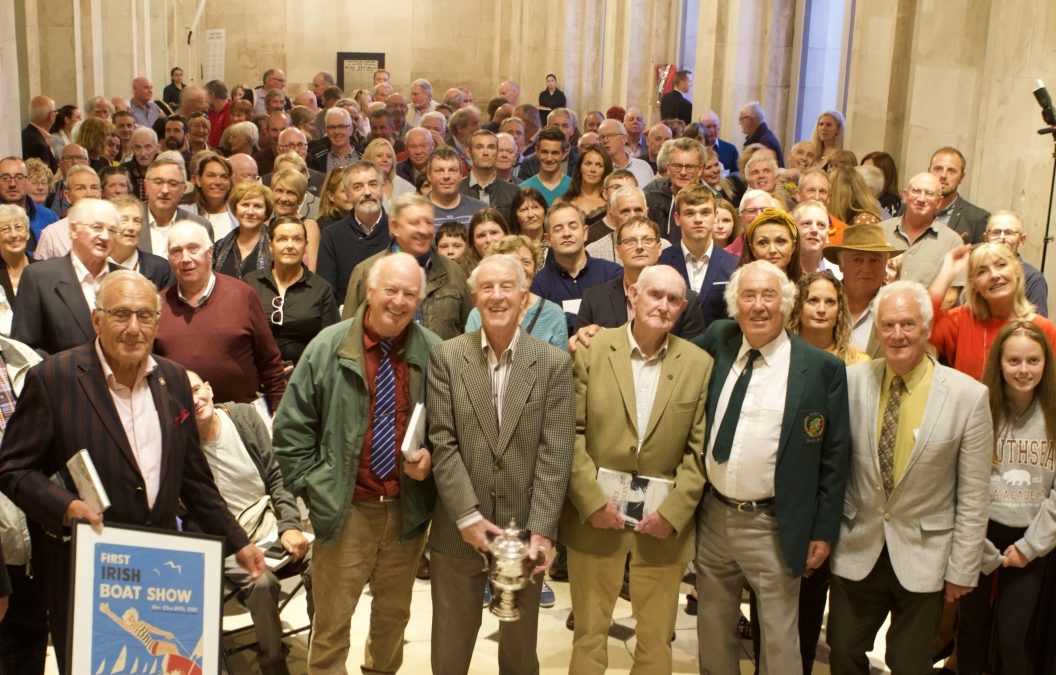 Close to 200 packed into Dublin’s City Hall on Saturday night for the launch of “The Liffey Descent – 60 Years of Ireland’s Toughest Canoe Challenge”, written by Iain Maclean, on Saturday evening.

Among them were the winners of the first seven races, and five who paddled in the very first Liffey race of 1960. 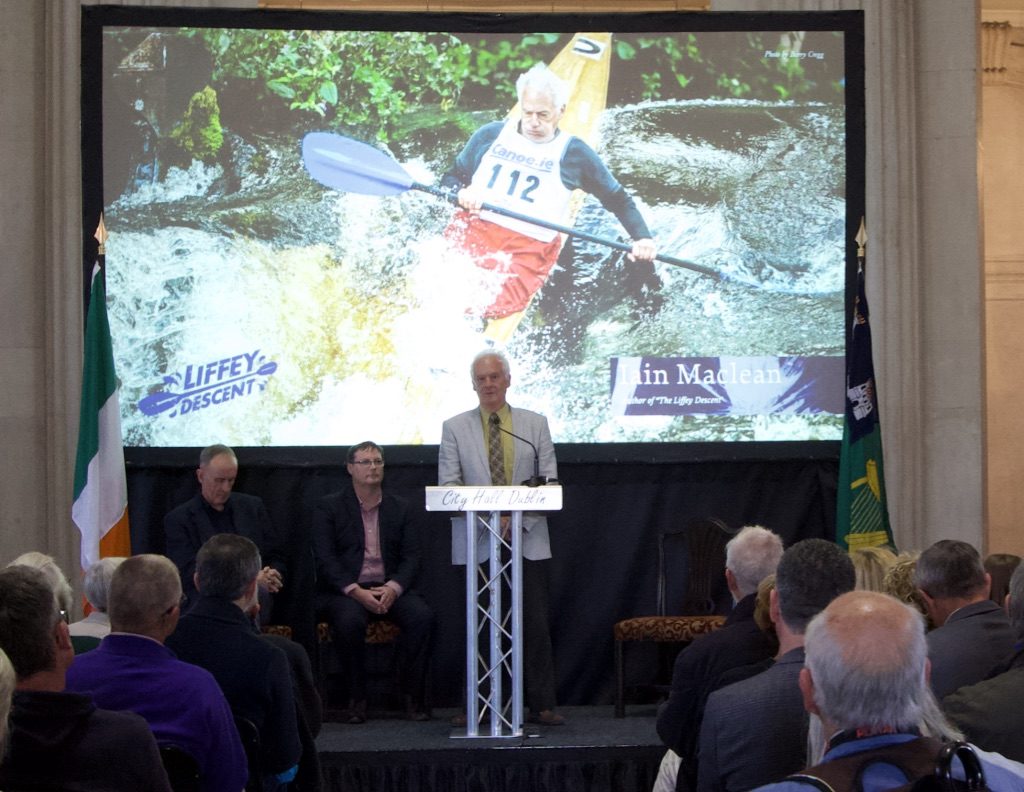 As well as his kayak An Mhurchu III, Roger Greene, the first winner, brought the original Coca Cola Trophy that he won outright in 1962. 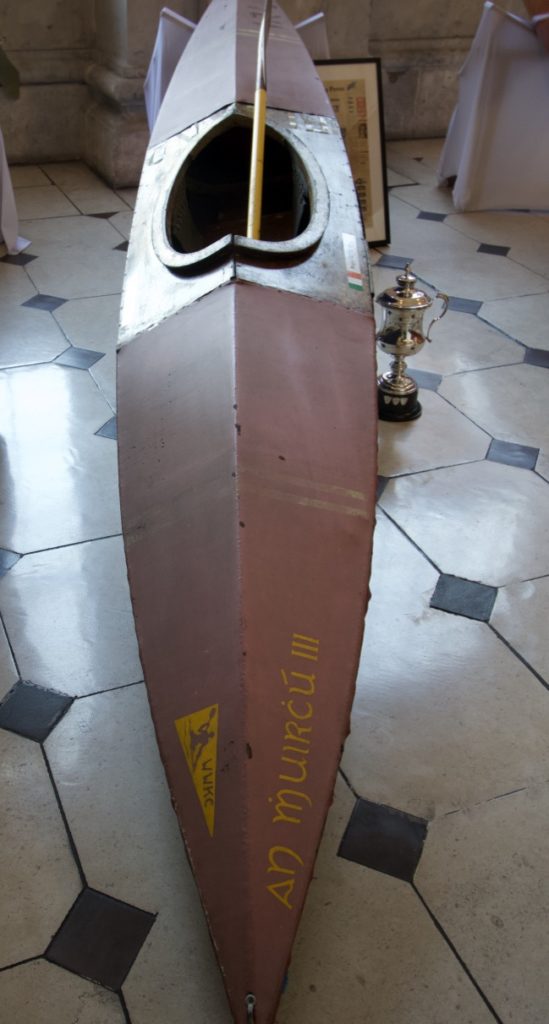 “Of course, there wasn’t a lot of canoeing around then and the first race was only a small one,” he said. After his wins in the three races from 1960 to 1962, Greene became a prominent figure in the sailing community.

Derek Martin, with a gift for promotion, was one of the men behind that first race which went from Grattan Bridge to Butt Bridge in the city centre. “It was only a small race organised as part of the first Dublin Boat Show held at Busáras around Easter,” he says, showing a framed poster advertising the Boat Show. 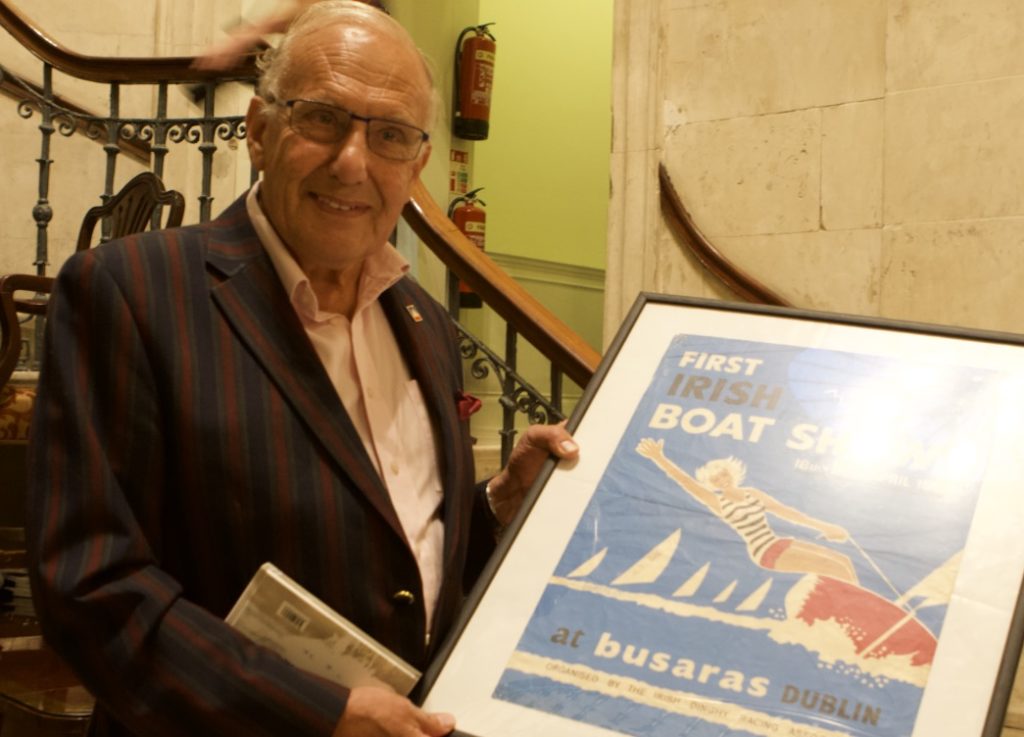 Helping round up the canoeists for the race was the late Ernest Lawrence, who would compete with his sister Elizabeth in a double. A year later, Lawrence came up with the idea of a two day long-distance race starting at Straffan with an overnight camp at Leixlip Lake. While that format lasted for one year only, the idea of a long distance race on the Liffey was firmly established. 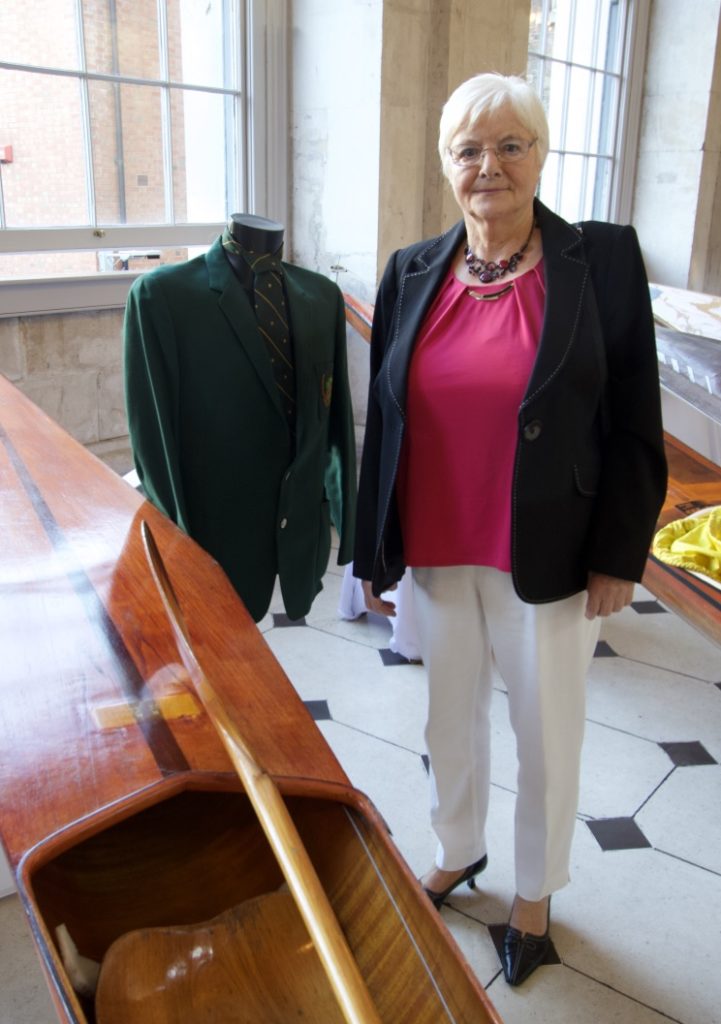 When the race, now called the Liffey Descent, was held in 1964, Neil Alexander from Belfast Canoe Club finished first in the men’s singles class and would win again a year later. “There weren’t a lot of canoeing races around, so I don’t know why I hadn’t heard of the Liffey race before then. We had long distance races in the north, on rivers like the Blackwater, with the Belfast club founded in 1960 and quite a lot of canoeing going on,” he said. 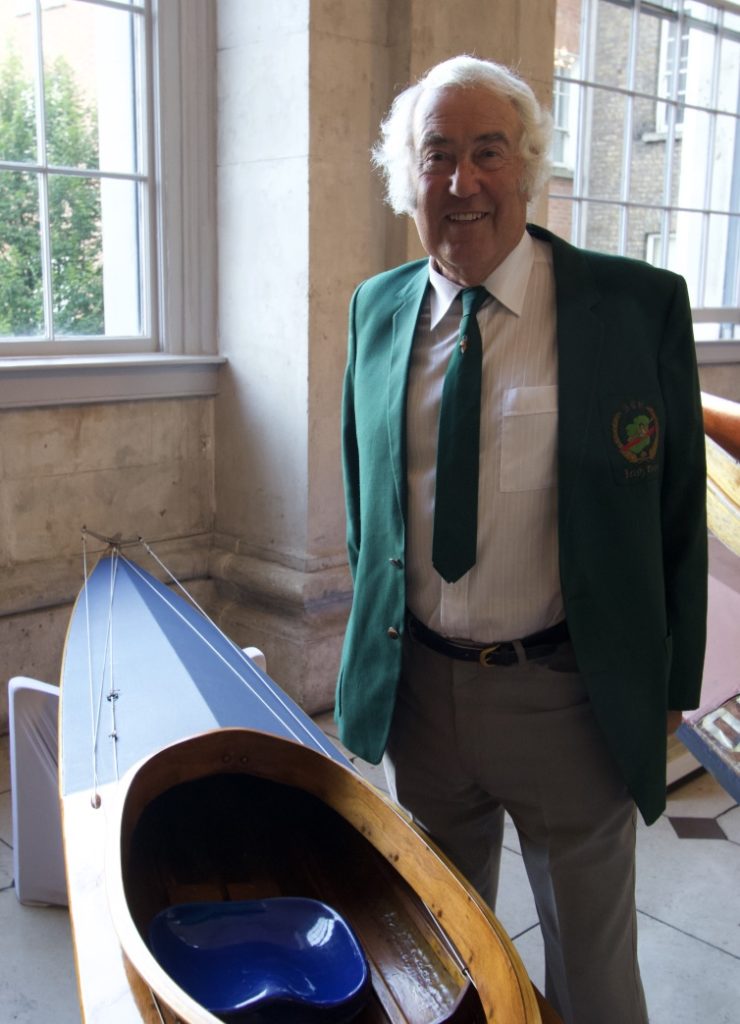 Neil Alexander from Belfast Canoe Club and his winning boat from 1964. The kayak has now been bestowed to Canoeing Ireland.

Jim Sweeney, now living in from Celbridge, was one of the seven to compete in the first race. “There was only one club in Dublin at the time, based in Dun Laoghaire; most of the races were up north. I was only a young lad at the time, living just off the Stillorgan road, and along with my cousin, Frank Burgess who lived in Nutley Road, we joined up. We were brought everywhere by people like Roger Greene, Derek Martin, and Ernie and Leslie Lawrence. We would go to a river bank, put our boats on the water and paddle off. You couldn’t do that now!”

When the two young lads decided to build their own kayak, the gardens of both their houses were turned into workshops. “We bought a book by Percy Blandford on building your own boat and thought we’d give it a go. The plans came to us by post on large sheets and after a trip to Noyeks in town to buy what we needed we got to work.”

A few years later, kayak building kits became available. “The Moonrakers were brilliant and you didn’t have to paint them. The only problem I found was that I kept falling out of the boat at first!” 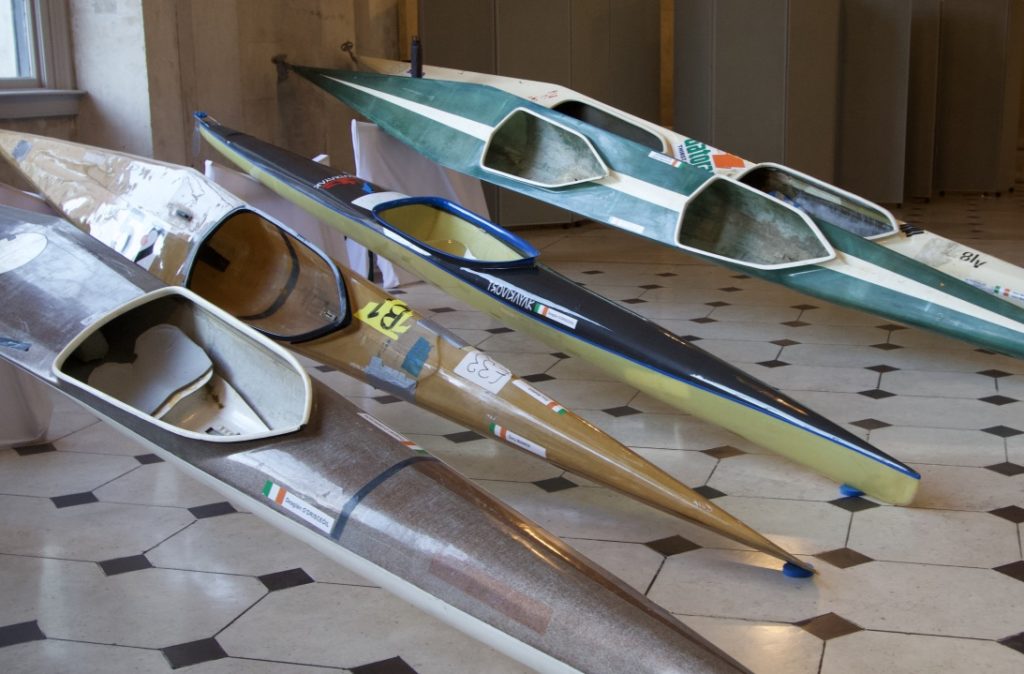 From the old to the 80’s and 90’s racing kayaks of Lawrence Canoes & Kayaks, Kemacraft & Glider.

Iain Maclean’s comprehensive history recalls those pioneering days and the changes both to the sport and to the Liffey Descent itself over the years, with the start moving to Straffan in 1970, where it has remained ever since. The finish has also changed a few times, and after a number of years in Memorial Park on the opposite side of the river, is now at the Garda Boat Club in Islandbridge. 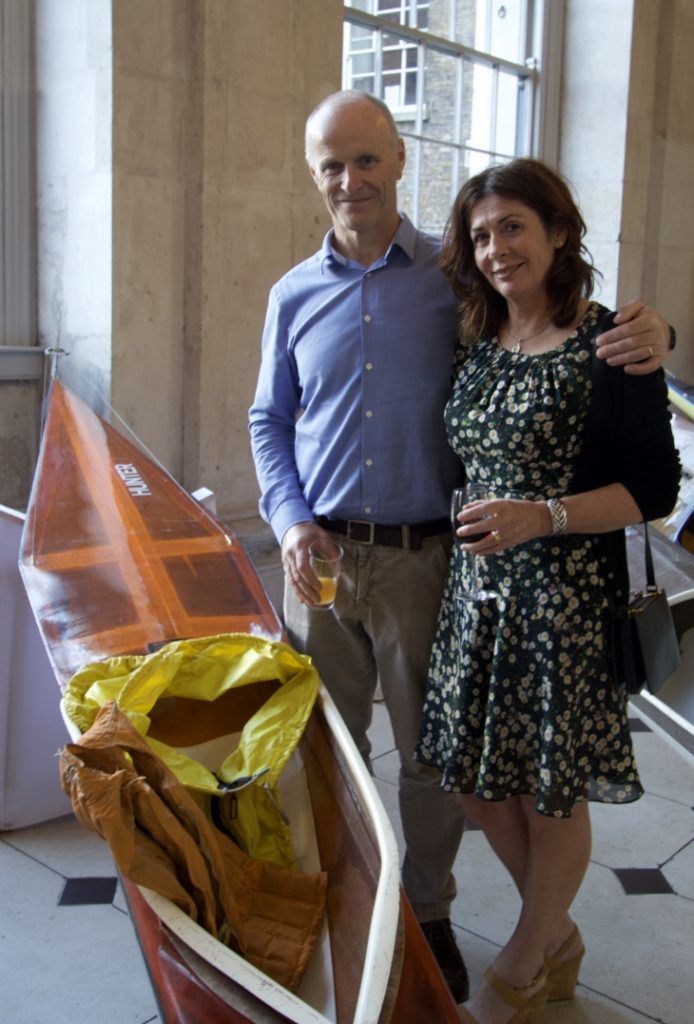 Malcom & Bríd banks with the first of the glass fibre racing kayaks to compete in the race. This Hunter racing kayak belonged to the late Dermot Mulligan of Salmon Leap Canoe Club.

This year’s 60th race will finish at the Garda Club on Saturday September 14, with spectators welcome to cheer on an expected entry of over 500.

Copies of “The Liffey Descent – 60 years of Ireland’s toughest Canoe Challenge” by Iain Maclean are available during the registration process for the race. Signed copies will also be available from Iain himself at race check in on Friday 13th fro 4pm at the Garda Boat Club, Islandbridge. He will be available again after the race on Saturday to get those last few signed copies.

If your unable to make the race but would like to pick up a copy of the book you can do so online or instore at the Canoe Centre in Palmerstown.

The display of racing kayaks and memorabilia will be on display as part of an installation at the race site at the Garda Boat Club on Friday 13th and Saturday 14th.

Additional photos are available on our Facebook page with thanks to Mick Feeney Photography.